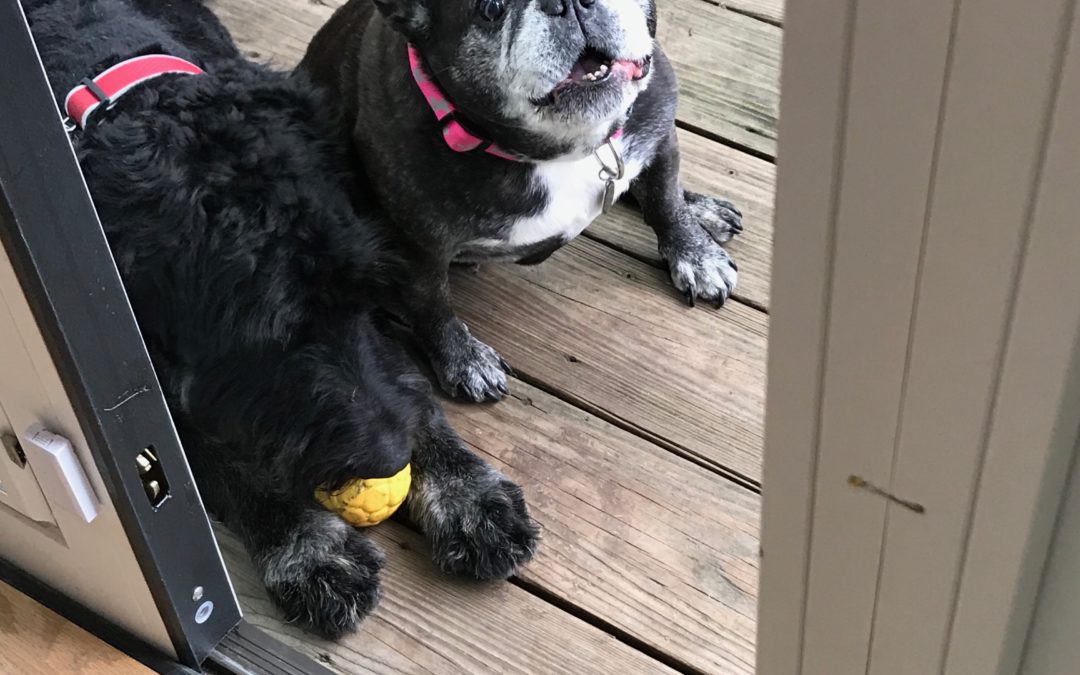 I’m Princess Diane Von Brainisfried and it’s a joy to welcome you into my kingdom where positivity rules and humor abounds. Here, I share tips and secrets for living your royally happy, radically fulfilled, richly meaningful life!

I’d like to talk to you today about how my Frenchie’s breast cancer brought me to a new spiritual understanding.

I recently found out that my beloved 14-year-old Frenchie, Lalo, had tumors on her breast(ssss). Like mother like daughter. She also had a dangerous, golfball-sized tumor on her spleen that could have burst at any time. 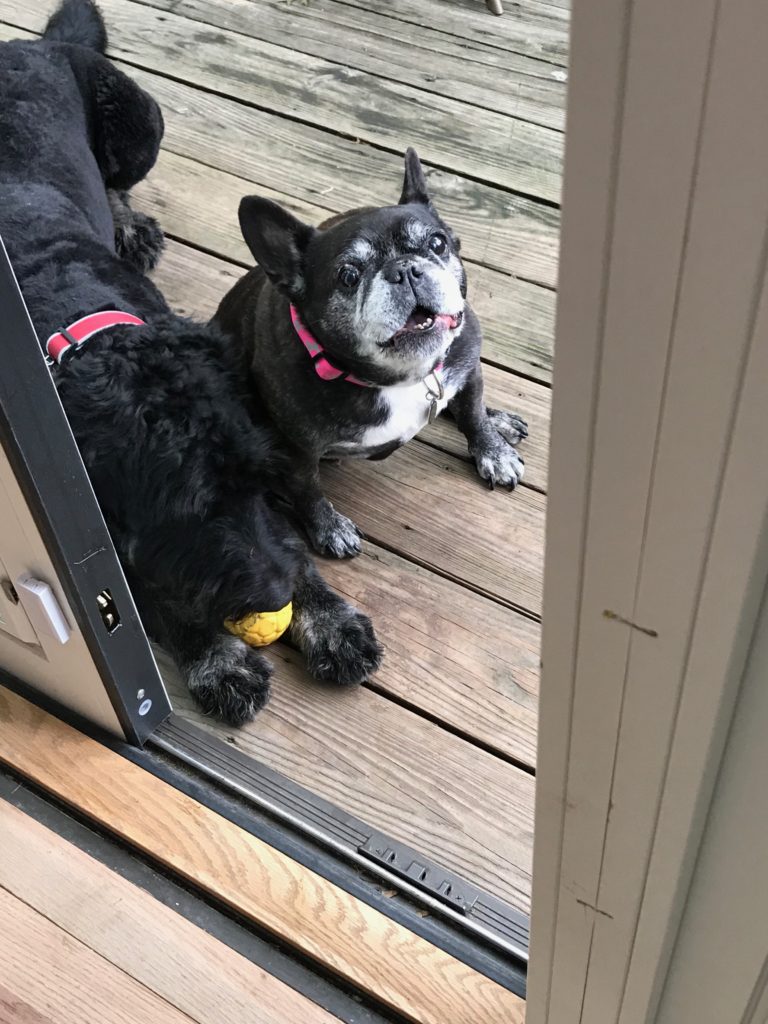 My husband and I drove two hours to an amazing oncologist (now a friend) who previously “bought” two more quality years for my adored Golden Doodle, Beasly.  After Lalo’s consult, we went to a recommended surgeon. I was heartened by the surgeon’s philosophy of not factoring in a dog’s age when deciding whether to operate. He does bloodwork to make his determination.

Luckily, Lalo passed that first hurdle.  I would have been distressed to not have been able to help her just because she’s 14.  Even though she is “une femme d’une certaine age,” she is living the good life. She has some pee pee and hip issues, but she is still relatively healthy and able to enjoy her favorite activities, like a morning walk to the garden for string beans. (Don’t tell her that I stick green beans from Trader Joes in my pocket to give her, as other critters have picked everything over.)

We went forward with the the surgery.

Lalo’s operation was successful!  I was worried about her so much, not only because of the tumors, but also because of the risks of surgery.  At any age, and certainly at an advanced age, there are risks.  I was also worried about what it would mean for her to go “spleenless.”  Here’s where it really gets interesting: the doctor said other parts of the body usually fill in for the spleen’s function.

Wow! I didn’t see that grace coming. I thought, what a miracle this thing called life is!

This spawned an epiphany. I realized there is something inside Lalo, in her “spirit dog” that got her through surgery. That compensates for the spleen. Something in her that is keeping her going as best she can. What is that?

Of course we can’t survive this life forever.  But, there are no absoulte time lines. Think of the redwood trees. They go on and on. Think of my father-in-law Joe Uniman; he was almost 101 when he passed. His LIFE FORCE didn’t abandon him when he hit 90. It kept trying to help him, til the confluence of bodily events made it no longer humanly possible.

This LIFE FORCE is in you, but it is not just you. There’s something else working with you.  It’s not you making your heart beat. You don’t know how to make your lungs expand and contract, either. It’s something else doing something.  Some expansive, positive, life-enhancing inner energy. Something that LOVES YOU!  Even in your sleep. Even when you are unconcsious.  Whatever it is, it’s INTELLIGENT.  SUPPORTIVE. POWERFUL.  And as long as possible, IT wants to, and will help you to thrive.

The epiphany for me was that I came to realize this FORCE and its “motive” for growth is empirical evidence that something divine and bigger than us actually exists!  I have struggled with that issue for years. I realized now that IT is not just doing this stuff on autopilot.  Not neutral. IT is doing its “job” to push us forward, to support us, to aid and abet us FOR OUR GOOD, FOR OUR SURVIVAL…and IT is doing so with all its might, as long as it is humanly (and doggily) possible.

Perhaps that’s one reason the surgeon didn’t rely on Lalo’s age to make the decision to operate. Maybe he intuits that if bloodwork showed Lalo was healthy enough, the mysterious LIFE FORCE would go to work and try to help carry her through, despite her advanced age. IT wasn’t going to try to pull her under. If that were the kind of energy force that existed, then there would be no chance, because she’s 14.  No…since the FORCE tries to support…he knew IT would try to work in her favor. Like a positivity default setting.

Thus, the next time you think you are alone in the universe, or that nobody has your back, or you feel helpless and sad, try calling on your LIFE FORCE for help. IT wants to be there for you, to support you, to help you get to where positive lives, as best that IT can. Remember…you ALWAYS have help from your insides too…your LIFE FORCE…

…Because it’s not just you in there!